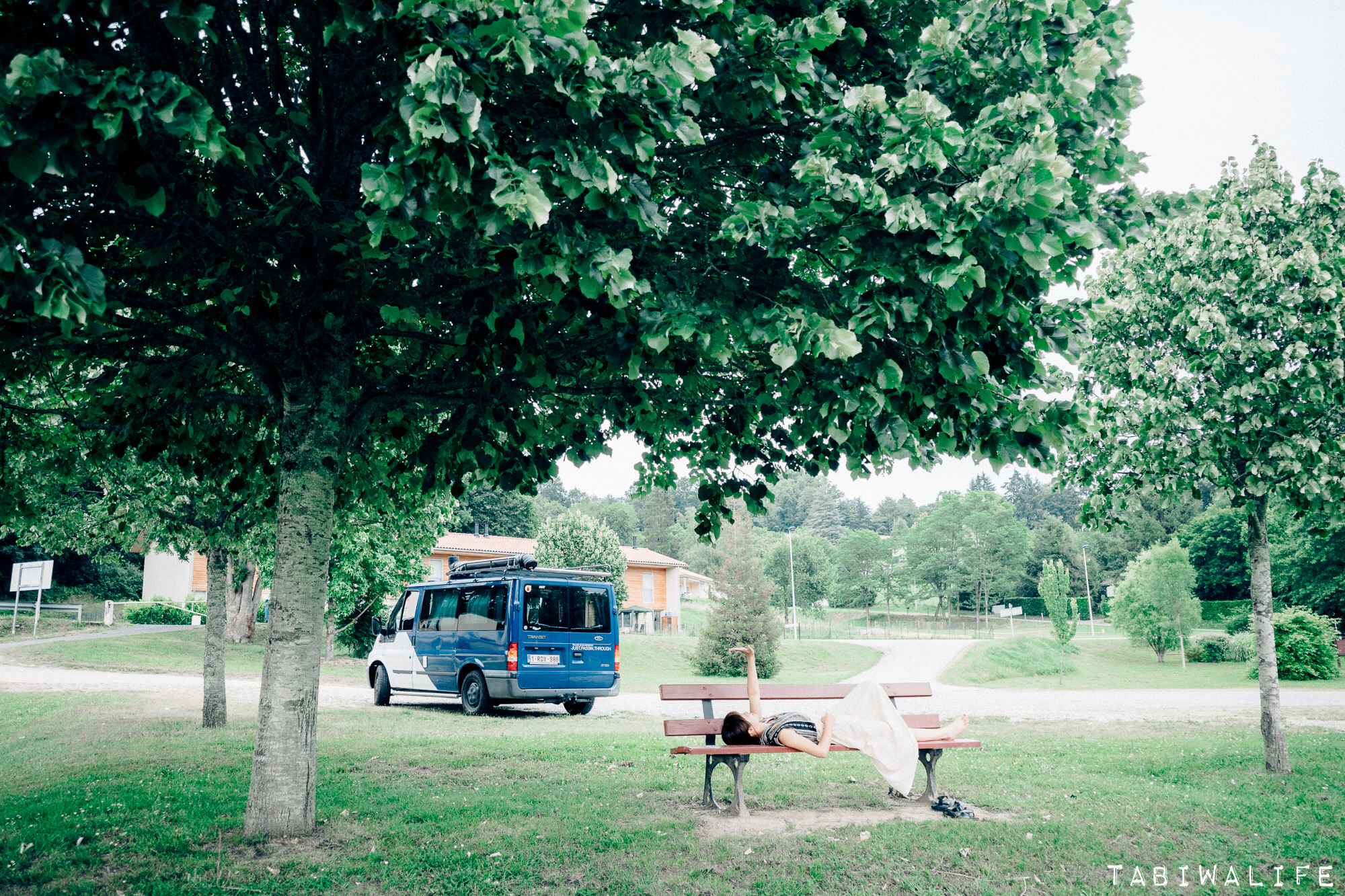 Hi there! I'm Daichi of Tabiwa Life, and my wife and I are currently on our vanlife travels around Europe for three months. This is the fourth part of the European vanlife series in VANLIFE JAPAN. Click here (The Departure / The Rental) to see the earlier volumes!

This is the beginning of our vanlife in Europe. We’re very excited to see the sceneries in Europe although quite worried about the manual van and the driver's seat on the left.

Anyway, I wonder where our journey will take us. Let's get ready for the new van and plunge into the European vanlife together!

If you're driving for the first time in Europe, you'll need to get an international driving permit (IDP) at the nearest licensing center if you already have a Japanese driver's license. It's just a bunch of paperwork without having to take any special driving tests so it's pretty easy to get.

We always get one whenever we plan on going on long trips somewhere in the world because like in Australia we rented a car and in Southeast Asia we rode motorcycles. It’s just that this time around, we got a manual van. And since my lovely wife can only drive automatic, only I applied for an IDP, making me the designated driver for the whole three months. Hah!

Automatic cars are mainstream in Japan but only 20% of the cars in Europe are automatic. It's something to consider even if you're not looking at vanlifing but maybe simply thinking about renting a car for your vacation in Europe. Of course, there are automatic cars, but manual cars have more variety and are cheaper.

One last thing before hitting the road. You should check out the traffic rules in each country that you're going to drive in beforehand. You cannot be driving somewhere only to realize that you don't know the rules of the road in that country. Learn them beforehand. No exceptions.

By the way, the most surprising rule to me is having to keep the lights on at all times in some countries. But to look the other way around, I feel like most of the rules are similar to those in Japan. I'd say I find driving on the right and the roundabout intersections with no traffic lights more noteworthy.

Get lost in the streets of Europe

We drove from Bordeaux to southern France and towards Italy to the east. What stood out most while driving were the cars parked on the side of the streets. And the closer we got to cities, the narrower the roads felt because of the parallel parking on both sides.

Our van is a little bulkier than normal cars so we kept worrying about hitting the side mirror of a parallel parked car. We also noticed how skillful the drivers are here after encountering a few instances where they swerved smoothly into impossibly tights spots!

In roundabout intersections, the car coming from the left going counterclockwise has the right of way. It took me a while to get used to judging when to enter and which way to go so I got honked at from behind quite a few times, which flustered me and sometimes caused my engine to stall. I was a bundle of nerves when I just started driving in Europe. LOL

My wife and I make a great team!

We try to play it safe on the road by allocating tasks: I focus on the driving while Ryo gives me directions from the passenger seat. Our van doesn't have a GPS so we relying on Google Maps to navigate the streets. Being both unfamiliar with the area and deprived of an in-car nav system sometimes leave us utterly confused whether we should make a left turn or a right that's why we try to concentrate on our own tasks and work together.

Make a right on that street!

What do you mean you guess?

I'm sorry about getting into fights with her, but trust me, I'm not the one that’s bad at directions! xD

The constant life on the move with vanlife will surely bring in a lot of excitement!

I felt always on the edge even after just a few kilometers when I started driving here. But the power of the human brain to adapt is amazing. It didn't take long for me to get used to driving a manual on the left side of the street through a roundabout. That said, I sometimes still mix up the windshield wiper with the turn signal. Heh!

At first, I couldn't enjoy the scenic view (as I was concentrating on driving) but eventually I started noticing the spectacular European cityscapes and nature. That's when it felt like I was really traveling in Europe! You just feel this unusual rush of emotions come through you at random times. I only learned about the word "vanlife" at the beginning of this year and now I'm living it in Europe, the very place it's born.

Life is full of surprises.

I don't know what I'll be doing next month, let alone next year.

I want to be traveling all over Europe safely and having fun with the vanlife! Click here (The Departure / The Rental) to see the earlier volumes!