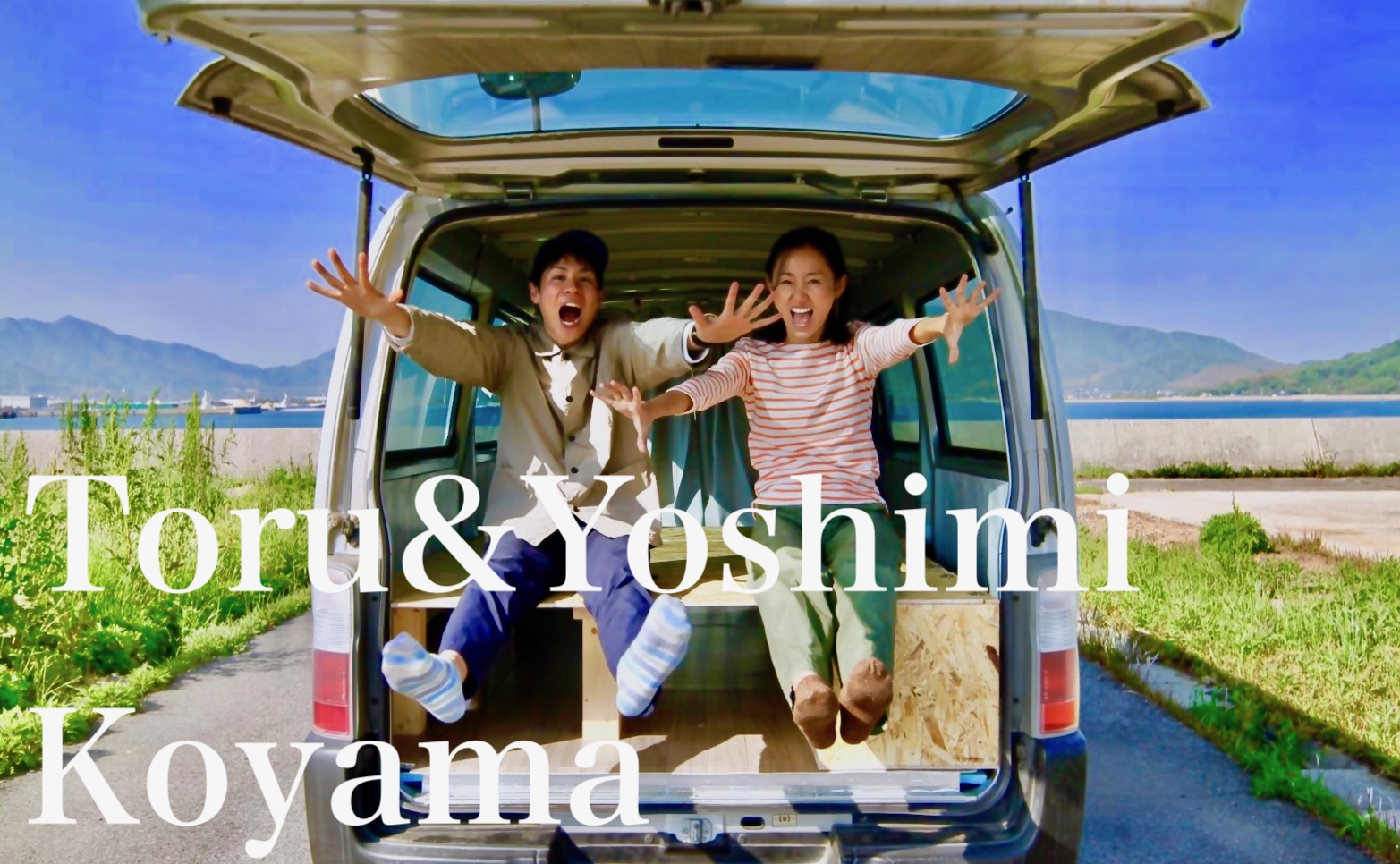 Van Lifers special feature explores the inspiring lives of the next-generation people living in vans. Vangirl Kaori Sakai talks with Torun and Yoshimin as they share the magic of travel and the secret to a close relationship. They go car camping with a Nissan Caravan all over Japan to spread good vibes and create close relationships between couples.

Tell us about your van life and how you two got started.

Torun: We actually just got started this year (2019) in June, so we're still on our first month as fully-fledged vanlifers, but we've been car camping ever since we started dating. We're both originally from Yamaguchi Prefecture and met at a mountain climbing group seven years ago. We dated for about four and a half years and got married in November 2016. I had no idea during this time that we'd eventually get into the van life.

Their picture when Torun proposed to Yoshimin with 100 roses. How romantic!

What a series of good events! Now I'm really curious about the lead up to your van life...

Yoshimin: Thanks a lot! (Laughs) We only started living together after we got married, but our days off were conflicting and we ended up not seeing each other frequently. This, after tying the knot. I was like, "What's the point of working every day?" and "Is this gonna be our lives forever?" I was really hung up. That's when we both decided to create more time for each other and quit our jobs in March 2018.

Wait, did you quit just like that? I feel like quitting job is a big decision... you weren't worried at all?

Torun: We were worried, actually. (Laughs) But our priority was our time together over our jobs. Of course, we have to work to live, but we already had enough money saved up at that time and wanted to focus on ourselves first and give up the shackles the corporate world. We thought we'd just figure things out and so decided to quit at the same time.

Your pictures tell a thousand words! What happened after that?

Yoshimin: We did what all couples do and traveled together. As thrilling as it was to have our time back to each other, you could only have so much fun with spending money. We realized we wanted to use our skills and make others happy as well.

Torun: I wondered what skills we both had and thought, "We're pretty close..." Then, we decided we'd be "close-relationship creators" and started blogging/vlogging about our every day on Instagram, Twitter, and YouTube, and shared our secret to having a close relationship. I want other couples to realize that it's possible to have a strong relationship like ours.

That makes sense! I can tell from your photos that you two are super close. Did the van life come after that?

Yoshimin: Yes, because of Peace Boat. In 2018, we went on a world cruise for 108 days from September to December. It so happened there was an event there for camping car lovers. Sure it was interesting, we thought, but we didn't think much about it at that time because it's expensive and too big, and something very foreign to Japanese culture. But they convinced us that it's possible to do in Japan even with a small van. We saw this as an opportunity to create a stronger relationship, so we decided to create our custom van.

Oh, so that's when you bought your Nissan Caravan! Was it a good buy?

Absolutely! Have you actually gone car camping somewhere since?

Yoshimin: Yeah. We left Yamaguchi last June 1, 2019 to start our grand Japan tour and now we're taking it slow in Shimane Prefecture. I really love going to places that are only accessible by car. We decide where to go according to our followers' suggestions. Just recently we went to a zoo in Atagosan Park in Izumo for free. I thought that was really cool!

Torun: Other than that, we often eat food in our van or at campsites to save money. I think it's pretty extraordinary and we love it. In fact, we haven't eaten out yet. We always eat at roadside stations or campsites after we park there. We usually go to campsites on weekdays, which all require reservations. They're fun ♬

By the way, what's the secret to maintaining a good relationship when car camping? Most people wouldn’t last a day without a fight in such a tight space...

Yoshimin: Thanks for asking that. Actually, we've never fought even once ever since we got married. I think it's really important to pay attention to the following:

1.   Show appreciation. E.g. say "thank you" even for the little things.

2.   Always communicate to avoid misunderstandings. E.g. tell them explicitly if you want them to wash the dishes.

3.   Be aware that you're living with the opposite sex. E.g. you can make

4.   Have empathy. E.g. don't just wait for the other person to stop talking so you can talk. Actually listen to them.

Basically, put yourself in the other person's shoes as much as possible. That's the most important thing. And it's something that anyone can do right now. For all the couples out there reading this, please definitely try. ♪

That's a great rule of thumb for every couple to follow! Where do you want to take your relationship from here?

Torun: Basically, I don't want us to fall into the basic couple category. I don't want us to be slaves to what the society dictates every couple should be after marriage. I want to be close to my wife and live our lives together freely. Oh, by the way, our wedding vow was "to become a crazy couple!" (Laughs)

Stay strong! I hope nothing but the best for you two! Please leave your message to the readers who might be interested in the van life or in a new journey!

Yoshimin: I think the van life is a great way to get closer to your significant other. It may be a little inconvenient to go car camping together, but I feel like if you work hard to get over the hurdles, your relationship will be unlike before. Also, you'll realize the value of water, appreciate the areas around you, discover new things, and be able to do more exciting things. You should totally get into the van life and travel more!

Torun: I especially think that couples should experience the van life before they get married. Don't let not having money be an excuse not to travel. Go on a budget car camping trip together and develop a closer relationship with each other. Not to mention, the van you use for your van life is like a secret base or something. (Laughs)

They traveled around the world in September 2018 and started car camping around Japan in June 2019. Their goal is to create closer relationships for couples around the globe. They blog/vlog about the secrets to a close relationship and the magic of travel on YouTube and other social media outlets.