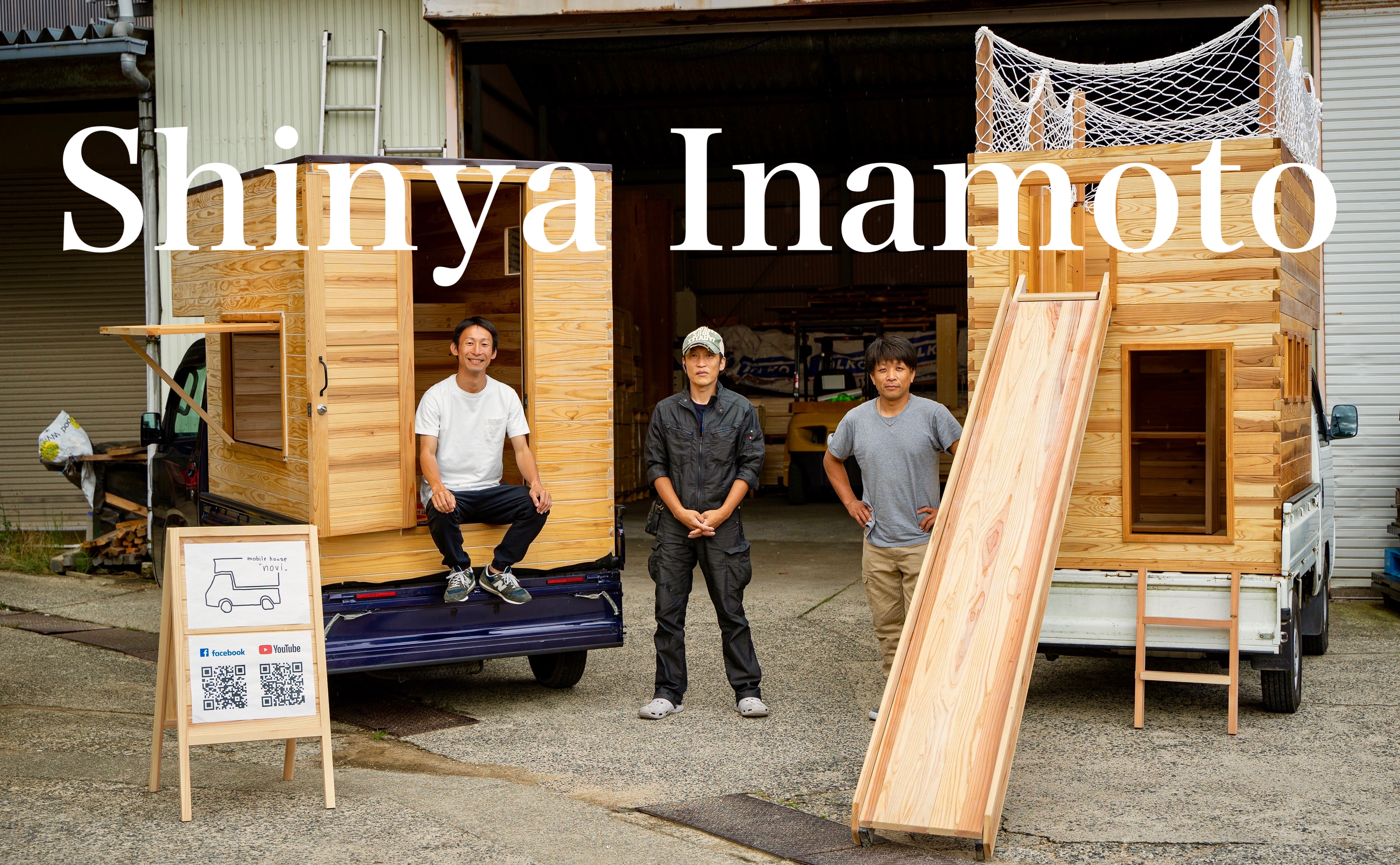 Tell us about your van life and how you got started.

I got addicted to car camping about 7 or 8 years ago. I was still working for a travel agency in Tokyo back then. I started a "secret hot spring club" where we went car camping to secluded open-air natural hot springs that were only accessible by car all over Japan. What really got me was nature photography which varied by season and weather. Something about the car camping lifestyle and the freedom to go anywhere just clicked in me!

Man, you really have been car camping for a very long time! Whenabouts did you move to Kyoto?

I moved there in July 2018. Maybe because I'd worked for a travel agency or that I did a lot of traveling for fun, but I never wanted to live forever in Tokyo. I'd always wanted to go somewhere different and try living where I'd never lived before. Actually, I thought about going abroad. I decided I needed to study English first, so I headed to the Philippines to study for three months then visited different countries. While doing that I heard that my then-girlfriend's (now wife's) hometown was looking for a "local vitalization cooperator." I thought it was the perfect timing and location for me so I decided to grab the opportunity and take on the challenge. And now here I am.

Your fate called you! By the way, I've never been to Yasaka... what kind of town is it?

Yasaka is a small town in a mountainous region of Kyotango in Kyoto Prefecture. In 2004, it merged with its neighboring municipalities and became part of the city of Kyotango. It's a very typical Japanese town with Satoyama landscape, and quite famous for hand-dug tunnels, Noma River, and "Forest Park Swiss Mura." Recently, it's been facing a number of challenges because of population decline. One such problem is forest conservation. I learned since moving there that the sea is dirty because the rivers are dirty, and the rivers are dirty because the mountains are dirty. I never realized how important it was to take care of our forests when I still lived in the city. In mountains, you actually have to cut down trees sometimes. When you do that, I thought, "Why don't we use those trees for timbers so they don't go to waste?"

I see! So that's how the mini truck mobile house was born!

That's right. In fact, at first, I was thinking about a tiny house or a container house. I talked with a friend about it and he told me that he knew someone that lived in a container house. That's when I heard about Shiun Tatsumoto. I went to Kanazawa right away where he was to meet him, but realized as soon as I got there that my friend had mistaken Shiun's mini truck mobile house to a container house. That's when I first learned about mobile houses. Unfortunately, though, his mobile house "Yun Yun" was temporarily not working, so instead, I got to check out his friend Nariaki Akai's mobile house "Toby" in February. I was so pumped I was like, "Damn bro, this thing is pretty sweet!" And in March I started building my first.

This is so awesome! The pillows are a nice touch!

Wow, you don't waste time, do you! Did you make this all by yourself?

Nah, I wanted to build it myself but at that time I had no experience whatsoever in carpentry. Not even those do-it-yourself types. Zero, nada, zilch. So, I figured I had to get friends to help me. I talked to a couple of local carpenters and architects, and with the help of Kyotango Woodworkers Guild I was able to build my own mobile house. A very talented architect helped me draft a plan, then I got the materials and finished my first one. But building it like you would a house would rack up the cost and time easily, so I thought about making the process simpler and approaching it more economically. And I came across an article about TV Champion "Mini Truck House King" on the Internet. I was really surprised when I saw that the winner, Ryo Kiuchi, used similar building techniques used for a log house. He simply used wooden boards for the walls. I thought it was very clever and so I decided to build my second one just like it in April!

I guess you picked up the skills while doing it. How did the second one go?

The second one went by pretty smoothly. I already had the experience from the first one so I finished this one in less than two weeks—faster the first one. The reason I was in such a hurry was because I planned to exhibit it at "Earth Day Tango 2019" during Golden Week. And when I did, people's reception blew my mind.

Kids were intrigued about my "secret mobile base!

From kids to the elderly, people liked my mobile house. They also liked the fact that I used wood from Kyoto. I originally just made it how I wanted to, but I was very pleased that other people also appreciated it.

Oh yeah, it definitely does look like the perfect playground for kids! Those smiles say it all!

Totally! Those kids were having a blast as soon as they stepped in and didn't want to leave, hah! They all made friends with each other instantly. It looked very unassuming from the outside, like a lunchbox on top of a mini truck... but it's actually a whole new world inside. Since then, I knew that the possibilities with mobile houses were endless. I wanted to create more beyond the usual!

I built my third one, a "moving athletic car" for kids. You can climb from the first floor to the second, which has no roof so it's open-air. This is the first of its kind in Japan that has a special slide where you can slide your way out of the “house.” When I brought it to the next event, as expected, kids were all over it.

Moving athletic mobile house sounds awesome! Do you drive around town with this?

I actually prefer driving with the second one. In fact, sometimes I go car camping with my wife with it. What we both found out was that wood prevented moisture from building up inside and that it's much more spacious than expected. It's perfect for going to the beach!

This is definitely your best one yet! Tell us how you see yourself in the future.

As you can probably already guess, yes, I'm gonna be making my fourth, my fifth, and so on. Tell you what, the process of building itself is really fun. Actually, I uploaded some videos on YouTube. A lot of people tell me that they want to buy a mobile house that's why I thought about selling and renting some out while also working towards more improved durability and safely. The more I sell, the more money goes into the wood industry, which also means more cash flow towards forest conservation efforts. And oh, I want those people who are fed up with cookie-cutter vacations to try out mobile houses. There are lots of isolated places with pristine nature and hidden mountains scattered all over the country waiting to be explored with a private vehicle. That said, I want to provide an opportunity for people to explore Japan through mobile houses starting right here in Yasaka.

It's like a dream to be able to rent a mobile house! Finally, give your message to the readers who are interested in the vanlife and other novel ways of travel-living!

I keep saying this, but I'm thankful that I've been getting a lot of opportunities to speak in front of young folks recently. I always tell them, "Everything is worth it, so if you want it, just do it." It doesn't matter if it's profitable or not, or you don't have a grand meaning behind it. If you think you're interested, don't worry about winning or losing, forget about the world for now and just do it. I think just the act of doing it is a win already. That's how it was for me anyway when I built my first mobile house. Seriously, why don't you try and do that "something" first?

Life
Yearning for the West Coast Van Life: My path from a Marunouchi pink collar-worker to a Vangirl｜Kaori Sakai
2019.9.29
Koki Miyashita

Life
My 20-year life as a carpenter changed when I first saw the van life | Daichi Suzuki
2019.8.17
Koki Miyashita

Life
Yearning for the West Coast Van Life: My path from a Marunouchi pink collar-worker to a Vangirl｜Kaori Sakai
2019.9.29
Koki Miyashita

Life
My 20-year life as a carpenter changed when I first saw the van life | Daichi Suzuki
2019.8.17
Koki Miyashita